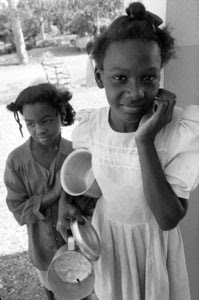 Having fulfilled their duty in the reproduction of a single print, the large black and white negatives were relegated to a small wooden box up in the dusty attic. It was dark inside the box. And stuffy. Years passed. The only excitement the negatives ever experienced was the sudden jolt of their resting place being changed with each attic cleanup.

In time, the house became vacant. Grandma was the last to go. The children, after some arguing, decided an estate sale was in order. The old negatives were, of course, included. And, as luck would have it, a Gallery Owner picked them up. He was convinced of the magnitude of his find after reviewing the negatives with the Museum Curator.

Everyone attended the opening of the new Victorian surrealist. While the Critics had difficulties placing the images within standard historical perspectives, the gluttonous Public was, as always, ready to anoint the new discovery.
The negatives were happy again, too. They were getting printed regularly. Best of all, no one suspected them.
No comments: