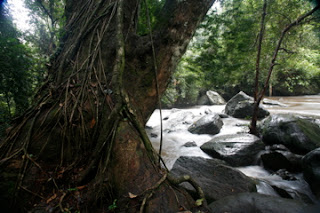 They asked him to join them again, but he politely refused. He would never be able to photograph with anyone else again. He recalled that time he had accepted the other invitation. It ended in disaster.

He remembered traveling with this self-same group to that particularly remote location. He recalled laughing together while scouting for just the right viewpoint. The jokes continued as they each emptied camera bags and erected tripods. Then, after carefully selecting film, lenses and framing, they proceeded to peer into one another's viewfinders. His first instinct was of total disgust. He remembered feeling dirty. He felt violated as the first examined his viewfinder. His window. The pathway to his soul.

He felt warm after the subsequent compliment on subject matter and composition. But the warmth suddenly became nausea as the complimenter quickly moved a tripod next to his in a bold attempt to ensnare the exact same image. Taking turns, each of them moved in to steal his photograph. He was furious. Aghast. But also powerless. He protested. He yelled and then cursed them! But they continued shooting. Over and over. Again and again. In the end, all he could manage was a sadly quiet whimper of a cry.

He hadn't bothered to get the film developed from that outing. He knew it was no longer his. It was then that he realized that he would always have to photograph alone.