Everyone calls me a photographer. You might just as well too. That is, I think you should. Inside me, I'm not always sure. When I was young and searching for a career, searching for what I wanted to do with my life, I knew I wanted to become a photographer. I knew I could trust what I saw in the viewfinder. If I tell you my story, maybe you can tell me if I got what I wanted.

The table linen in the oak paneled dining room was bright white. I was twelve and it was summer. I cradled the 126 Instamatic in my hands, believing then that it was far more fragile than me. Rocking slowly back and forth, close and far, I watched the antique basket I had set out to photograph become larger and smaller with each comforting swell. The world became so simple and distilled as I squinted into the viewfinder that day. The sharp boundaries of the frame cleanly demarcated that scary real from my comfortable imaginary world. The sharp black edges acted as cleavers; chopping away in one simple motion all that was tragic and messy in my life. The subject, like me, was isolated from the general tumult of the household. The basket hovered on a peaceful ground of white. As if willed by the spare, clean background of the photograph, the blather of my parent's incessant arguing quickly faded into a soft white noise. As I entered the viewfinder, I recall knowing that, as long as I alone held the camera, it was I who determined what would be photographed. It was I who would decide what this picture would look like.

I never saw that photograph. It was on a roll of film which sat with at least eight more on the far corner of my parent's writing desk. I can remember posing for pictures at each holiday we celebrated. I can remember asking my parents about getting pictures from the spent black cartridges and being told that no, it would cost too much money. Perhaps some time later. When I left home to seek a life, at least another half dozen more rolls had accumulated in that corner. The newer ones were the smaller 110 size cartridges. While we had obviously obtained a new camera, and continued to expose film at all of the appropriate times, the cartridge captured images remained anchored to the desk's corner.

Since my first real look inside a viewfinder that day, I've learned that technically, that particular picture was totally impossible. If it had been developed, it would have looked like some crazy off-center, orange tinged ball of mush. But it was an important picture for me. Because it showed me the way to my insides. And it showed me the way away from home.
No comments: Links to this post 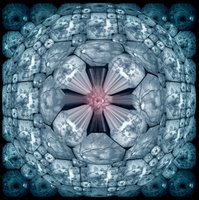 Inside each of us is a small, steadfastly capped bottle filled with a magic oil. It is easy to find, but difficult to search for. Its essence is imperative to work of the highest caliber. The oil must be applied generously for any lasting effect. It enriches when dissolved in equal parts of form and content, but alights when combined alone with either a technique or a subject matter. The oil favors no medium, age, or education. It coats silver molecules as readily as brush bristles. It is as alive in the sciences as it is in the arts, but the oil evaporates quickly when consumed by commerce.

Many complain that they have no such bottle, or that they have never experienced the warmth of its contents. Perhaps they have not learned how to break its seal. Some finally do open the bottle, but mystified by the contents, reveal its magic to no one.

Some mistake the oil of others' bottles for their own. These plagiarists superficially search for the bottle but never manage to penetrate their outer rind of learned responses.

In haste to test its contents, some spill its total potency immediately upon uncapping. These creators are brilliant in youth, however after the initial detonation their output is dry and derivative.

Finding the bottle requires patience and insight. Opening the bottle and applying the oil must be practiced. Revealing more than a glimpse of the contents is impossible - the oil is visible only to our selves.
No comments: Links to this post

"I think I'll be a writer."
"Why?"
"It's not hard. I blog for my friends."
"Those don't count."
"I wrote something really good for a class once. Everyone liked it. Does that count?"
"Only if you write well consistently - day after day, month after month, year after year. Once just isn't enough."

"Well, writing has to be easy - no office to go to - I can write at home. The words are already there, all I have to do is put them together."
"But which words will you pick - will you agonize over each and every one? Will you write and rewrite until it's just what you want to say? Is what you want to say worth saying?"

"Maybe I'll be a photographer then. Taking pictures can't be all that hard."
"Oh?"
"Sure. I take snapshots all the time."
"Those don't count."

"Once I took a really good picture - a pretty sunset - nice trees, good color."
"You took a good picture once? A photographer photographs every day, month after month, year after year. Consistently original photographs over a long period of time are the mark of a good photographer."

"But photography has to be easy - all you do is snap the shutter once you see the picture. I could just travel and snap pictures."

The Boxer and the Photographer

Sure of his step, and eager to win, the shadow boxer enters the ring. His gloves laced tightly, his adrenaline high, he faces his shadow. He strikes, jabs, cuts, kicks--but never really grapples with his opponent--that dancing, black menace on the wall. He lunges forward--reaching out he is met at the barrier. The shadow silently laughs from the other side--just beyond his reach. He dances, it dances. He jumps, it jumps. He strikes out, it strikes back. Always countered, the boxer tires.

Completely spent, he slumps on his stool. Seeing the shadow do the same, he jumps up to declare victory--only to be met, in equal terms, by his shadow.

“We can’t both win!” the boxer yells.

“But we can both lose,” the shadow answers.

Firm in technique, and sure of his style, the photographer loads his film. His camera set, his adrenaline high, he begins his assignment. He frames, then shoots. He changes perspective, moving only as close as that invisible line lets him. He respects the barrier between recording and becoming involved. Physical reality, constantly changing, presents itself through his lens. It sways with his emotions and intellect. It constantly entices him--begging him to reach out--insisting he not touch. The photographer frames and shoots, frames then shoots again.
Sure that he has captured the essence of the scene, he retires to the darkroom. Later with pictures in hand, he compares his prints to reality.

They are not the same.
No comments: Links to this post